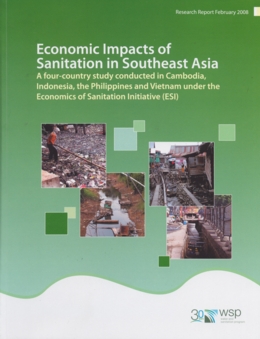 Economic Impacts of Sanitation in Southeast Asia: A four-country study conducted in Cambodia, Indonesia, The Philippines and Vietnam under the Economics of Sanitation Initiatives (ESI)

This study examines the major health, water, environmental, tourism and other welfare impacts associated with poor sanitation in Cambodia, Indonesia, The Philippines and Vietnam. The study is based on evidence from other investigations, surveys and databases. The impact measurement reported in the study focuses mainly on a narrow definition of sanitation – human excreta management and related hygiene practices. The measurement of water resource impact also includes grey water, and the measurement of environmental impact includes solid waste management. By examining the economic impacts of poor sanitation, and the potential gains from improved sanitation, this study provides important evidence to support further investment in sanitation. The goal of this report is to show decision-makers at the country and regional levels how the negative impacts of poor sanitation can be mitigated by investing in improved sanitation. Table of Contents: Executive Summary Foreword Abbreviations and Acronyms Acknowledgement Table of Contents 1. Introduction 2. Study Methodology Overview 3. Economic Impact Results 4. Discussion, Recommendations and Conclusions Annexes Annex A: Study Methods Annex B: Algorithms Annex C: Study Results Annex D: References 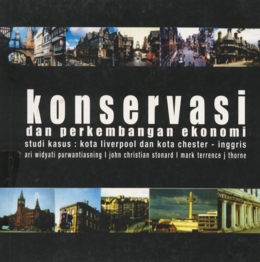 Urbanization and Sustainability in Asia: Case Studies of Good Practices 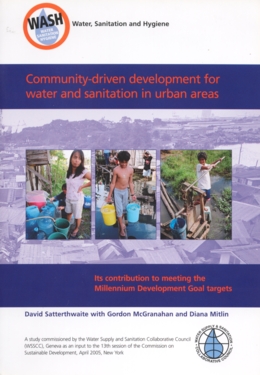 Community-driven Development for Water and Sanitation in Urban Areas: Its contribution to meeting the Millenium Development Goal targets 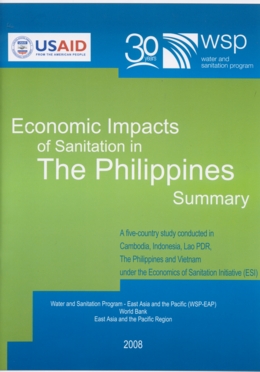 About 20 million Filipinos, or more than a quarter of the Philippine population,

were exposed to poor sanitation in 2004. Moreover, with an average population

growth of more than 2% per annum, an additional 2 million people will require

concerns because poor sanitation has a wide variety of negative impacts.

Sanitation is often a neglected aspect of development in developing

countries. This in part explains the lack of reliable data and research to

verify the significant burden imposed by poor sanitation on society. This

study attempts to address these shortcomings by conducting a quantitative

and qualitative assessment of the impacts of poor sanitation on health,

water, other welfare indicators, and tourism.

The analysis interpreted sanitation as activities that are related to human

excreta. However, there were instances in which sanitation as it relates

to gray water and solid waste were also included. The study relied on

evidence from secondary sources and was hence limited in the scope

Overall, the study estimates that poor sanitation leads to economic costs in the

order of US$1.4 billion or PhP 77.8 billion per year. This is equivalent to about

Estimated to be about US$1 billion, this item explains about 71% of the total.

Poor sanitation also contributes to the pollution of water resources. The study

US$323 million. Other welfare impacts and the impacts of poor sanitation on

tourism were also estimated to exceed US$77 million per year.

Having estimated the impacts, the study also evaluated the benefits

associated with improved sanitation and hygiene practices. The results

with user preferences by about US$38 million, whereas improved

toilet systems can reduce health costs by US$324 million. Improvement

resources and can reduce costs by US$364 million.

The findings of this study indicate that poor sanitation has significant

economic costs. It also showed that improvements in the sanitation

gains that go beyond the simple mitigation of the costs, such as the

range of impacts of poor sanitation. The results are a wake-up call to

the Philippine government and the development community. Poor

sanitation affects everyone, especially the poor and vulnerable (children,

has with other development goals (poverty and hunger reduction,

attention from players whose interest is the equitable socioeconomic

development of the . Decisionmakers should act now and

in a concerted way to increase access to improved sanitation and 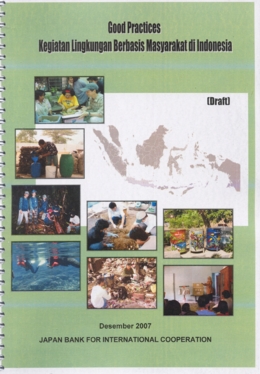 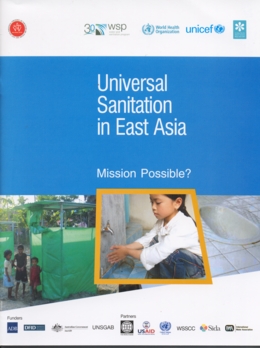 Economic Impacts of Sanitation in Southeast Asia Summary: A four-country study conducted in Cambodia, Indonesia, the Philippines and Vietnam under the Economics of Sanitation Initiatives (ESI)

The Sanitation Impact Study was conducted in , , the and . A study is ongoing in Lao PDR. The study was led by the and Pacific office of the World Bank’s Water and Sanitation Program (WSP), with the contribution of WSP teams in each of the participating countries. The study took one year to complete, and has undergone two major peer review processes. This summary report is based on four fulllength country reports and a full-length synthesis report.

This study examines the major health, water, environmental, tourism and other welfare impacts associated with poor sanitation in

, , the and . By examining the economic impacts of poor sanitation, and the potential gains from improved sanitation, this study provides important evidence to support further investments in sanitation. The goal of this report is to show decisionmakers at the country and regional levels how the negative impacts

of poor sanitation can be mitigated by investing in improved sanitation.

, and the lose an estimated US$9 billion a year because of poor sanitation (based on 2005 prices). That is approximately 2% of their combined Gross Domestic Product (GDP), varying from 1.3% in the and , to 2.3% in and 7.2% in . The annual economic impact is approximately US$6.3 billion in Indonesia, US$1.4 billion in the Philippines, US$780 million in Vietnam and US$450 million in Cambodia. With the universal implementation of improved sanitation and hygiene, it is assumed that all the attributed impacts are mitigated, except health, for which 45% of the losses are mitigated. Universal sanitation would lead to an annual gain of US$6.3 billion in the four countries, as shown in the figure below. The implementation of

ecological sanitation approaches (fertilizer and biogas) would be worth an estimated US$270 million annually. The Mumbai Slum Sanitation Program: Partnering with Slum Communities for Sustainable Sanitation in a Megalopolis

Some text in the modal.